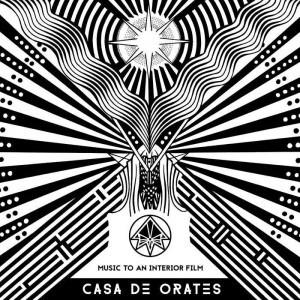 Background/Info: Hailing from Chile, Casa De Orates is driven by the creative spirit of Manuel Knwell. The band has already released several productions and is clearly inspired by dark-ambient music.

Content: The title of the album clearly indicates what the music is all about. The music is dedicated to films, which has been transposed into dark-ambient compositions. This is not exactly the familiar dark-ambient sound we’re used to hearing on leading labels in the genre, but a more diversified production. The diversity is definitely due to the contribution of guests and a few remixes as well.

The dark atmospheres have been reinforced by some Eastern sound elements, but also by experimental and even glitch-like passages. Spooky voices lost in an imaginary empty space can be heard as well while a few tracks feature some rhythmic parts moving into IDM.

+ + + : “Music To An Interior Film” clearly appeals to awake your fantasy skills creating a scary and mysterious universe. The low sounds create a somewhat agoraphobic impression where you feel like you are getting lost in endless corridors of obscurity. There are several poignant cuts on this album finding their ultimate apotheosis on “Trainspotting Femii with Casa De Orates”. This track mixes the dark-ambient basis of the album with an IDM approach while a few vocal lines performed by Femii accentuate the spooky side of the work.

– – – : All of the tracks can’t totally convince me and I especially refer to the more glitch-like minded “Pig Fucking Juventud Psychoboreal with CDO”.

Conclusion: Casa De Orates is an interesting discovery coming from a rather unexpected part of the globe. This band reveals a diversified and enjoyable ambient sound.