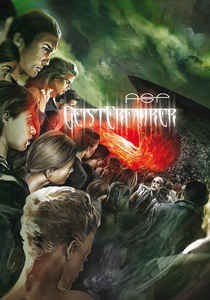 Background/Info: ‘Asp’ aka Alexander Spreng became one of the uncontested flag holders of Trisol. “Geisterfahrer” was originally released as an EP in 2012 and features 6 songs. The songs have been reworked –mainly by the addition of real drums, and completed with two extra tracks.

Content: This work reveals the obscure power of ASP. The sound is a melting pot of metal, gothic, electronics and epic influences. It’s filled with rage, but also explores melancholic passages. The electronic arrangements add a melodic flavor to the work while it sometimes also reminds me of Rammstein.

You’ll rediscover the 6 familiar songs from the EP in a reworked version plus 2 bonus cuts totally matching with the power of this composition.

+ + + : ASP confirms its versatile character. After the more cabaret-inspired gothic novels (cf. “Verfallen”) ASP moves back to hard metal-inspired compositions. The sound has been accomplished by alluring German vocals plus melodic arrangements and even some medieval ingredients. Even if this band is mainly famous in their homeland, “Geisterfahrer” is a fully enjoyable production even for non-German music lovers, and especially for those who like Rammstein and co. There are a few outstanding cuts on this work.

– – – : Even if both new cuts are matching with the original power of this release, they don’t exactly add a real bonus. Both songs appear to be a kind of B-side cut.

Conclusion: It was a good idea to re-release “Geisterfahrer”, which sounds harder and definitely different compared to the original version.