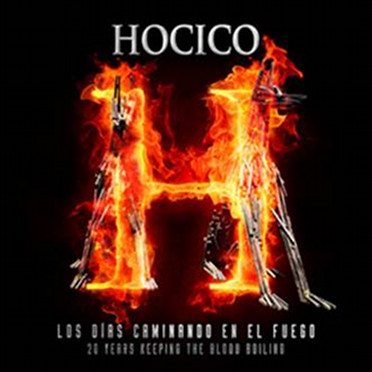 Out at the end of August is the 20-year anniversary release for Hocico, the compilation “Los Días caminando en el Fuego”. The 16-track release doesn’t feature the band’s biggest club hits but instead not finalized songs from the early days of the band. Erk and Racso finished these tracks to ready them for release. Note that there is also a new track featured on this release, namely the all new song “Thy Kingdom Come!”.
For the diehard fans, there is also a box set which comes as a black wooden box shaped like an Aztec pyramid and limited to 999 copies. It contains a deluxe 2CD-version of the album which contains a total of 29 new vintage tracks plus the new song and an exclusive third disc titled “Dias de Perros” with 10 unreleased demos from the early days and a data track containing 25 minutes of early video concert footage in iPod format. The box furthermore contains several memorabilia.