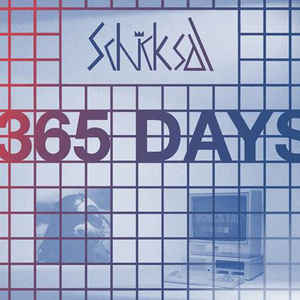 Background/Info: If you’re a little bit familiar with the Belgian Walhalla Records, you for sure know they’re specialized in pure 80s underground electronics and related genres. And if you’re a 80s nostalgic you for sure remind Schicksal. This project was driven by Rudi Huybrechts and I remember his great 12” entitled “24 Hours” released in 1988 on Subway Records (a division of Antler). This album brings Schicksal back to life, featuring a selection of tracks that has been composed (and reworked) in between 1982 and now. The album is available as a vinyl release.

Content: Schicksal brings the early hours of 80s electronic experiments and EBM alive. It’s pure vintage-like music revealing the minimalism from that period, the sterile way of singing, classical sampling parts and melodic passages. It also is an opportunity to get back to the famous “24 Hours”-song featured as “Perfect Body Mix”, but especially to discover songs that were never released on vinyl before. I also like the very last song of the opus for its new-beat flavor.

+ + + : This album sounds like a documentary from a band, which definitely deserved much, more recognition. I often ask myself why some 80s bands –like Schicksal, remained in the shadow of some so-called ‘bigger’ bands with less talent!? Schicksal really had enough potential to get more famous and considered as one of the Belgian pioneers in EBM. This work will ravish all analogue freaks. It’s a great and minimal-like work. The songs sound simple, but there’s the magic of the sound treatments. This is a great and I dare to say essential release getting us back to the early Belgian EBM: dark and visionary!

– – – : I just noticed a few songs, which maybe suffer from the weight of time, but there’s no reason to complain.

Conclusion: Schicksal maybe is one of the ‘forgotten’ Belgian pioneers of electronic underground music. This album is a late consecration of a genius artist!