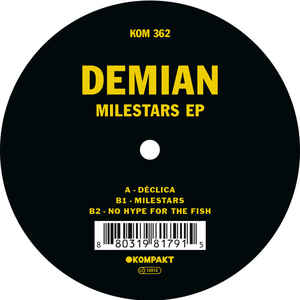 Background/Info: Operating from Paris Damien Pontonnier was previously active in the Northern part of Spain. DJ-ing and organizing music events were his main activities until he started composing his own material. The newest EP was released on Kompakt and features three new cuts.

Content: “Milestars” sounds diversified, but always carried by minimal-technoid influences and ambient, astral effects. Some of the repetitive sequences progressively lead you into trance. The main characteristic of this 12” is the impressive sound creation and –production.

+ + + : It’s hard to qualify “Milestars” as techno music. This production reflects intelligence in the sound creation and the global composition process. The tracks don’t only focus on typical dance beats, but has something visionary. Different elements have been brought together resulting in three noticeable cuts.

– – – : The main difficulty for Demian maybe is this diversity and the difficulty to label the music as one specific genre. You don’t hear me to complain.

Conclusion: If Demian is dealing with techno music, I think he then invented a so-called avant-garde movement. If this is the techno from the future, I hope to get old pretty soon…

Best songs: “Milestars”, “No Hype for The Fish”.