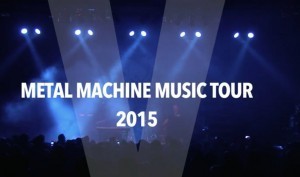 A few weeks ago we announced that the German act Die Krupps were to release “V – Metal Machine Music”, an all new album in September 2015 via SPV Records. The title of the album will be “V – Metal Machine Music”. The band also announced a European tour for september 2015, supported by Red Paintings and Janosch Moldau. We haver now received the trailer for that tour which you can see below. It features the new track “Battle Extreme”.