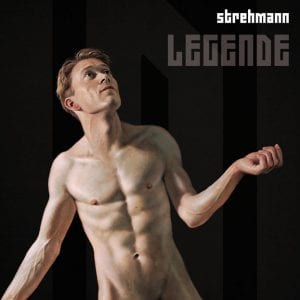 Background/Info: Behind this solo-project is hiding Ronny Strehmann who’s also involved with the dark-electro/EBM formation eXcubitors. After a few EP’s featuring one together with Frank M. Spinath the artist has accomplished his debut full length featuring 15 songs inspired by old German poetry.

Content: It’s hard to define the sound of Strehmann as the influences are quite numerous. From wave-pop to cinematographic, to electronics and even gothic, “Legende” has a lot to offer. Most of the songs are driven by reverie, which creates the link with cinematographic music. The songs have been sung in German and English. The song featuring Frank M. Spinath remains the attention grabber although not the best cut from the album.

+ + + : No doubt about it, there’s no better way to introduce your debut album as featuring one song sung by a famous singer such as Frank M. Spinath. Sound-wise “Legende” is an intelligent composition on, which you can hear the artist patiently accomplished his work. The compositions are progressing crescendo sometimes resulting in an ecstatic final (cf. “Mein König”, “Sind Wir Frei”). One of the main strengths is the evasive atmosphere hanging over the work.

– – – : The album takes you in its grip for nearly 80 minutes and that’s maybe a little bit over the top. A few songs could have been skipped to hold on to the fascination. I’m not saying that the song together with Frank M. Spinath (cf. “Schwur”) would have been better skipped, but it definitely is not my favorite one from the opus.

Conclusion: “Legende” is an album to sit down and listen to. It’s a work you can dream to, and it is also is a promising debut for this artist.

Since you’re here … … we have a small favour to ask. More people are reading Side-Line Magazine than ever but advertising revenues across the media are falling fast. And unlike many news organisations, we haven’t put up a paywall – we want to keep our journalism as open as we can. So you can see why we need to ask for your help. Side-Line’s independent journalism takes a lot of time, money and hard work to produce. But we do it because we want to push the artists we like and who are equally fighting to survive. If everyone who reads our reporting, who likes it, helps fund it, our future would be much more secure. For as little as 5 US$, you can support Side-Line Magazine – and it only takes a minute. Thank you. The donations are safely powered by Paypal.
Tags: Excubitors, Ronny, Strehmann