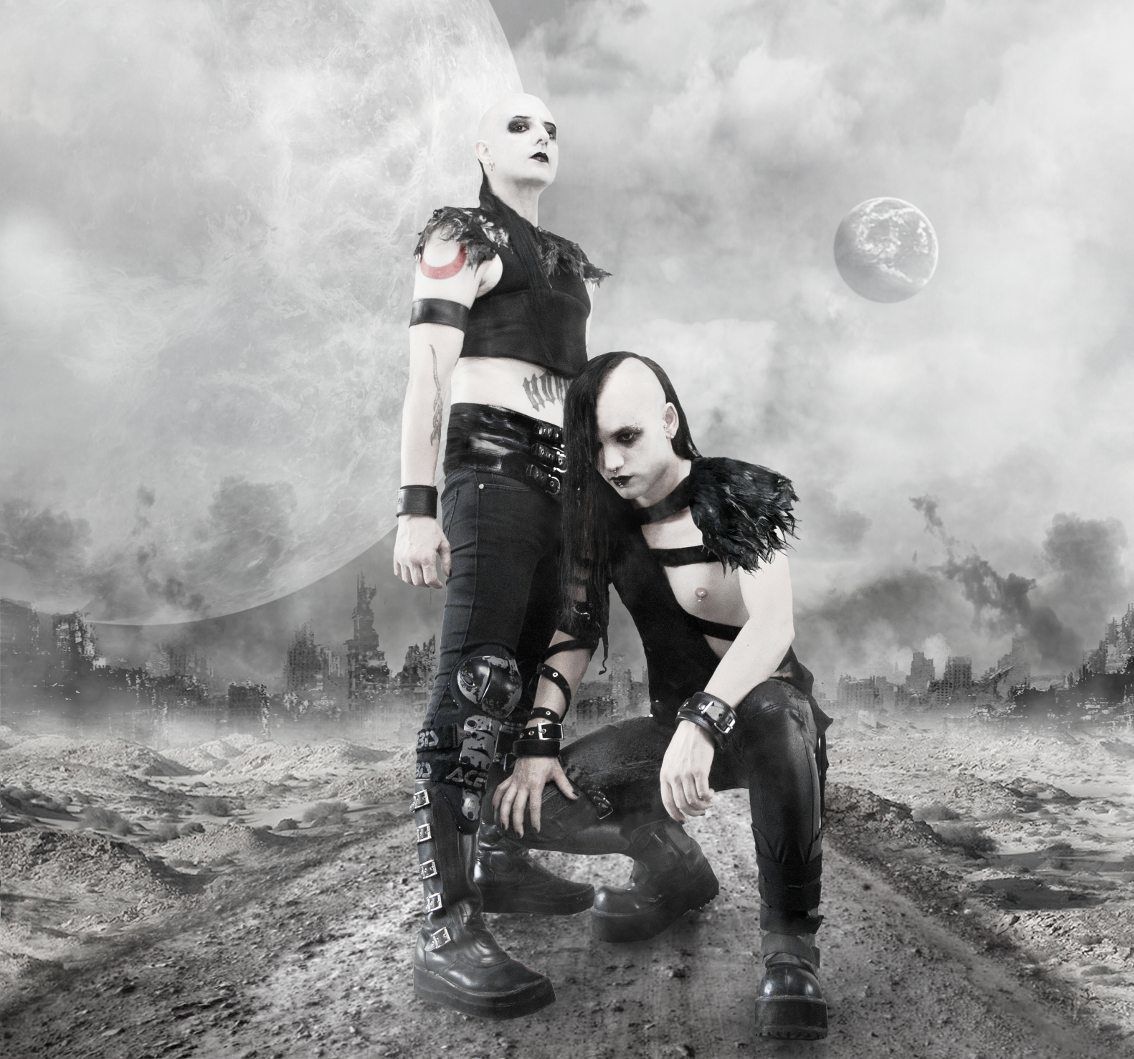 (By Dlanod P) The Greek cult duo Siva Six return with their 4th full length studio album “Dawn Of Days”, to be officially released on November 11th. (available right here on CD or right here as a download via Bandcamp). But today, Side-Line can offer you an exclusive stream of the full album “Dawn Of Days” and an interview!

First the album’s exclusive stream on Side-Line – you can check the interview below whilst listening.

SL: Hi Z, its been 3 years since your last release “Superstition EP” what has happened in between ?

Z: We had gigs at some countries that we had never visit before like France (Ex Fest) Ukraine, we did our 1st appearance at WGT, played at a few great venues in Athens but mostly it was all about hard work for our new album “Dawn of days”. It took me more than 2 years to finish it, that period was the most intense of my life, I went through some extreme spiritual changes which inspired the concept of the new album ,it was the time for some groundbreaking steps overall so I moved to Leipzig in Germany. My band mate & techno super hero for the last 3 years Christian Cambas left the band due to personal issues so I hired back my old comrade U-RI, he was behind the keyboards between 2006-2008 so we know each other pretty well.

SL: So Siva Six is now located in Leipzig, how does it feel?

Z: I liked Leipzig from the very first time we arrived for WGT. Athens is a hard and bad ass city, I had enough from it, I needed some peace of mind, which my new location is offering now. It’s also a userfriendly city gigwise since travel expenses have been an issue several times in the past, it looks good, sounds and tastes good…

SL: On 11th of November your new album “Dawn of days “ will be released via Alfa Matrix, it took you some time as you pointed out earlier on.

Z: I started to write the music and lyrics for “Dawn of days” more that 2 years ago, it was a hard but pleasant road, and it became the most personal album I have ever released. The experiences that I went through and the agony of my every step has left its fingerprint on this album. It’s a concept album about the Apocalypse and a life time trip that finally reaches its destination.

Z: I love movies and soundtracks, you can hear some of the greatest music that has ever been produced on soundtracks. I think that making covers from soundtracks is a subconscious choice, at the other hand I feel free to do it instead of covering one of the pasts club hits or any other track I would feel a fan would do. I added my own lyrics so somehow I participate more plus I love our covers otherwise we would not do it. As for this cover it has been divided in two parts “The dead walk the earth “ and “ Twenty eight “. I had in mind to do this cover for a long time, so when the concept of the new album was revealed to me I knew it was about time.

SL: What do you mean when you say “the concept of the new album was revealed to me“ ?

Z: I wish not to speak about this.

SL: Fair enough. Next question then, what’s your relationship with the occult?

Z: Since I was a kid I used to look at the stars, wanting, needing answers. I have read the way of several spiritual paths, I was a theoretical thelemite for more than a decade, never more ….that path fulfilled its cause. The darkness I experienced was one of the driving forces of my transformation, I strongly recommend to each individual to be extremely careful with the occult and the spiritual path of its choice… respect the balance, do not enter with arrogance or ignorance otherwise the dark side will chew and spit you out in pieces…

Z: A balance between that contrast could be an easy answer but when it comes to “art “ you can not really measure it, a lot of artists fall into that trap I guess, repeating actually themselves. As for Siva Six we do release an album only when I am feeling 100% sure that the result pleases my soul. There is always a lot of work music- and lyricswise and a mission to accomplish in each of our releases.

SL: Although Siva Six has been around for 11 years you have adapted your style, but the occult feeling when listening to you work remains the same.

Z: We have done 4 albums, 1 EP and 1 remix album so far. All I can tell you is that we were always devoted in doing it our way. I love so many different kinds of music and I guess I do get influenced and inspired from them, but we never tried to copy or to sound like anyone. I know from the very first moment when I play the first notes of a new song that this is me, this is Siva Six. I do not know exactly how this happens even though I have co-written and produced tracks with most of my bandmates so far or a lot of tracks were not actually produced by me but I know it does. Thank you for the compliment by the way!

SL: Siva Six has a good live reputation I noticed.

Z: The stage is our natural playground… what happens on stage is a quite unique experience that we share with the audience, It’s a 2 way road, a never ending give and take of power. I like to shout out loud my words.

SL: What’s coming up next for Siva Six ?

Z: We are working on a new videoclip and a lyric video, we also have some gig offers that have arrived and I am thinking of doing a new EP on 2017. We have also done a duo with Vas Kallas from Hanzel und Gretyl for the track “Until death reunites us” and I just love it, so I want a special release for this track which will be probably accompanied with a few remixes from the “Dawn of days” album and a few new edits. As for the rest I have no idea and that’s what counts, ha!